I created a foliage star with the leaves of the lily plants. I desaturated it, and colorized it blue and purple and darkened both versions to use as alternate radial backgrounds for the lily mandala. I stroked the stars with 9 pixels of white to make it pop out from the background. With the flower star. I duplicated a layer and turned it solid white, and rotated it to serve in the outer ring. I felt that the star needed some more bright white. This is a new technique I will use again. 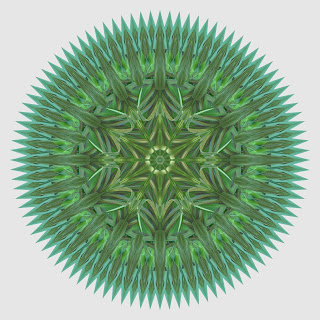 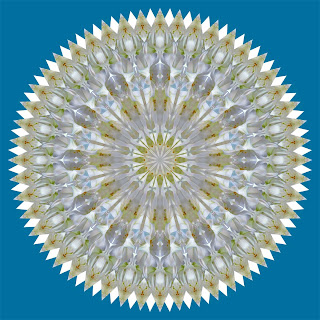 I am showing you the stars and then the mandalas with the darkened stars as radial backgrounds. I could do the same with the flower star or any other star I make. 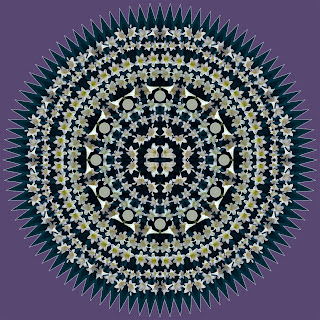 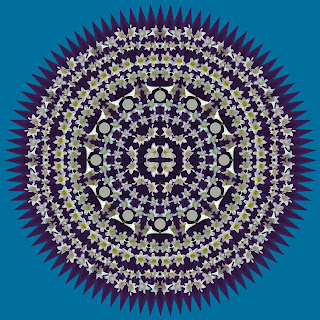 With this, I now have all the elements needed to complete the mandala and array.
Posted by Bob Coyne at 8:11 PM No comments: 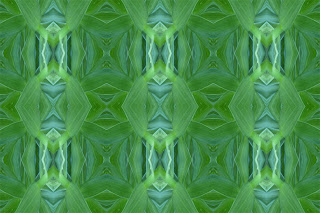 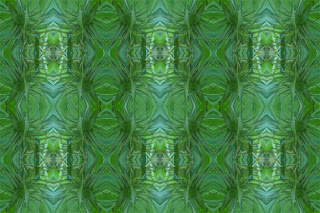 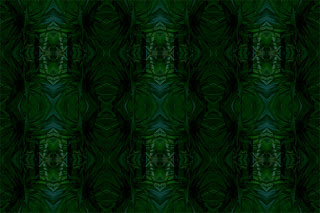 I have started using photos of Easter Lily Flowers to create a mandala and other designs. I have used photos of leaves to create a patterned background as you see first. It is nice, but not as interesting as I wanted; so I cut out a lily plant and superimposed the resulting pattern as seen in the second image. That was more complex, but didn't look right; so I reduced the opacity of that layer to 55% and got the third image. I then darkened the whole design to serve better as a background. This is a technique I will use more of as it adds a whole new dimension to the designs. 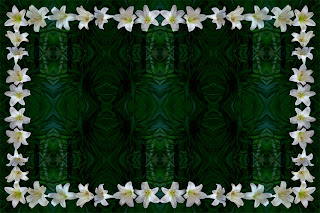 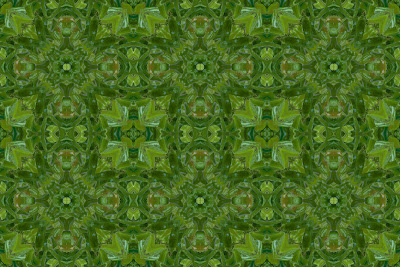 I have started on my Christmas card designs for 2012. I am using red & green chiles for a Southwestern theme. This 4x6 background pattern was made with photos of green chiles. I have started using a triangular cutout instead of a square to create the pattern. That simple change adds a whole new dimension to the final image. I cutout an equalateral triangle or distort another triangle into an equalateral and place it in a square on my grid. I then flip it horizontally and rotate 90° to create my first square. As always, if you need help, I am happy to walk you through it via Skype or answer any email questions.
Posted by Bob Coyne at 6:08 AM No comments:


I have completed another animated tutorial posted to You Tube. This one shows how to make digital backgrounds. I will be adding more animated tutorials to my You Tube channel.
Posted by Bob Coyne at 8:07 PM No comments: 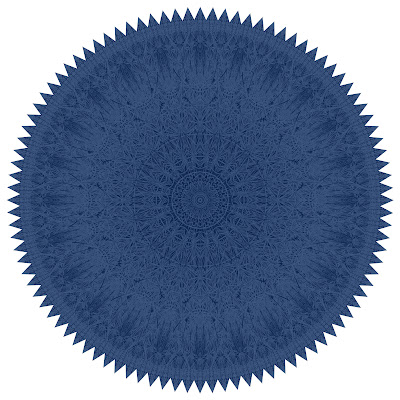 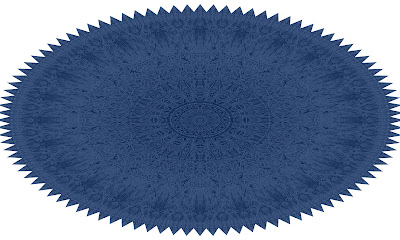 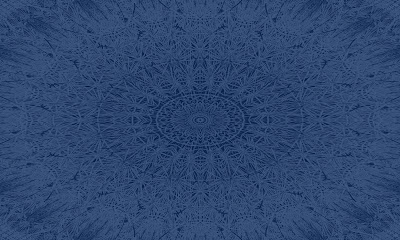 There is something else we can do with the radial backgrounds. We can distort them into an oval and scale them up to fill a rectangular page.

I have just completed my first animated tutorial. It is still rough, but good enough to be helpful; and I will be able to improve upon it with future productions. I am giving you the link to its You Tube site. 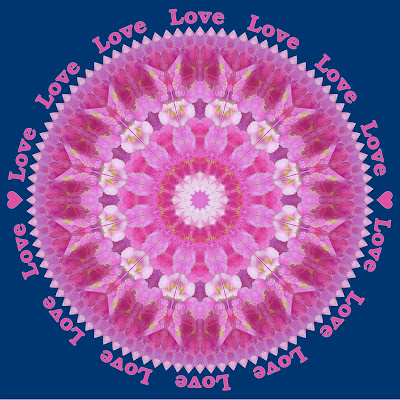 This star is made with hollyhock flowers. I created it just in time for Valentine's Day next year. If any of you need help wrapping text around a circle, let me know. I use it a lot.
*******
I have not done it here, but it occurs to me that if you want, you could improve these designs by digitally painting over them. Just create another layer to work with and merge it down when you are satisfied. You could also overlay other photographic elements to make more sophisticated images. I may go there eventually, but for now; I like the surprise elements and prefer to keep it natural.
*******
I look at what I do as a launching pad from which many of you will take off in directions I wouldn't think of. Enjoy the adventure.
Posted by Bob Coyne at 8:08 PM No comments: 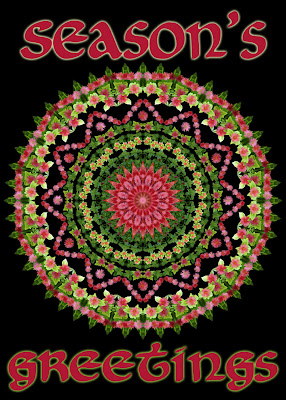 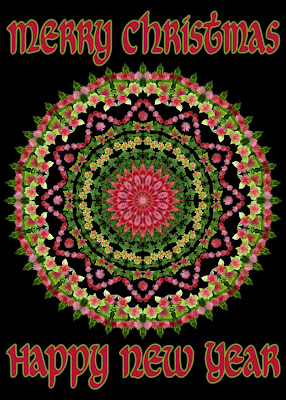 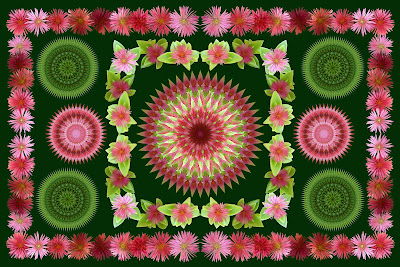 The bottom image shows a composite design I made from photos of succulent plant we have in our yard. I finally identified it as an ice plant. It grows well here in Tucson, and has pretty little red flowers, so I thought it would work well for holiday creations. This image could work well for a calendar or placemat.
*******
The middle image is my Christmas card for 2010 with the Merry Christmas salutation. The top image is an alternate version with a Season's Greetings salutation.
*******
RERERENCE: i144,145,146 t117
Posted by Bob Coyne at 9:33 PM No comments: 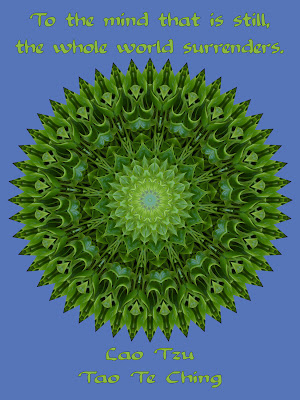 Brian posted this on facebook a couple of weeks ago and I use it here with a star made from succulent foliage. I posted in as this week's illustrated thought on my Tidbits From Tucson blog. I am posting it here to add the text to our list. I am not referencing the star, as it is used as an element in larger designs and is not meant to stand by itself. If you ever want a print made with one of these star designs, I would be happy to fill your order.
*******
REFERENCE: t117
Posted by Bob Coyne at 9:52 PM No comments: 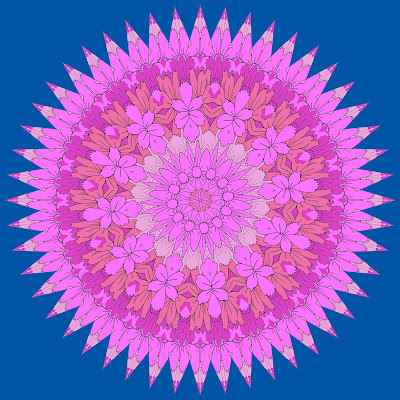 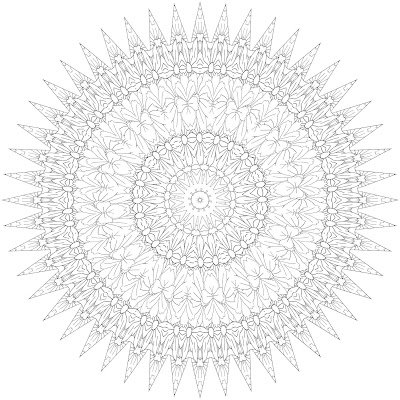 There is a soc/rec program here that makes their own Christmas cards every year to send to its members. Last year, I offered to let them use my Christmas Cactus design, but they declined because it was full color and would have used to much ink. So this year, I wanted to offer them something more cost efficient, and created this black & white star using outlines of cosmos flowers.
*******
I don't know if they will use it, but in the process; I developed a technique which will have wide applications. There are endless possibilities here for beautiful and interesting designs. The top image shows that these can be colorized. This could be useful for t shirts, where the detail in some of my complex photographic designs doesn't work so well. I like making t shirts because it is fun to combine the images with sayings, but some of my designs don't translate well to fabric, so this may be a solution.
*******
One could create these stars using the outlines of all kinds of textures and objects, but the idea of using flowers works especially well for me. One could also use freehand lines and shapes; as well as all kinds of geometric patterns, shapes, and designs.
*******
The other new technique I developed here was a new way of doing fills. I have tried several ways, and ones which give you a separate color fill as a layer are nice in that they are easy to change with color overlay. I used that method with the butterflies as demonstrated earlier.
*******
Here, I created the outline and then merged it down with a white or colored solid background. I then used the magic eraser to remove the color around the star. That gives me the star as a separate layer. By saving the outline in an original file as a separate layet, I can repeat the process to get any color I want.
*******
This is important, because if you try to overlap flowers to make the triangular cutouts, the lines overlap. Sometimes, that can create interesting patterns, but it can also create a mess.
*******
So experiment and see what you can come up with. You can bet I will.
Posted by Bob Coyne at 8:32 PM No comments: 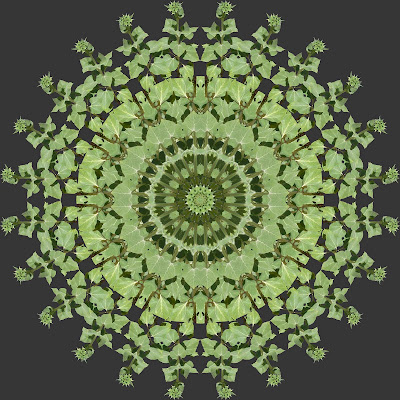 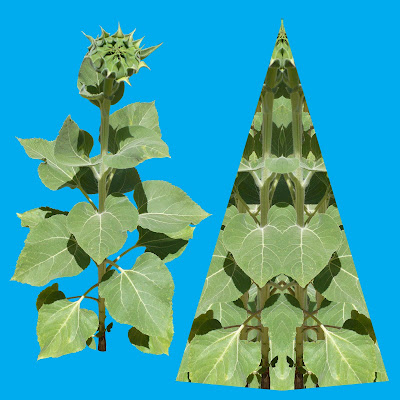 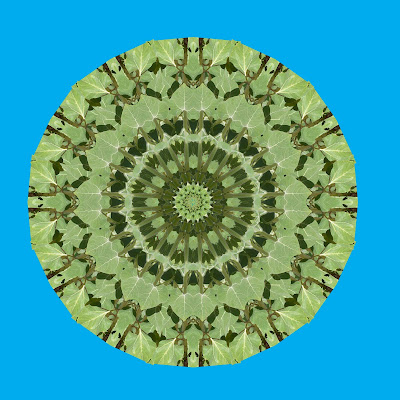 Let's give you one more polygon made with sunflower foliage. To create the triangular cutout, I overlapped several plants so that I could extract a long, narrow triangle with lots of variation along its length. The result is the extra intracacies of this design.
*******
Let's carry this one step further by adding a ring of the whole plants.
Posted by Bob Coyne at 6:46 PM No comments: 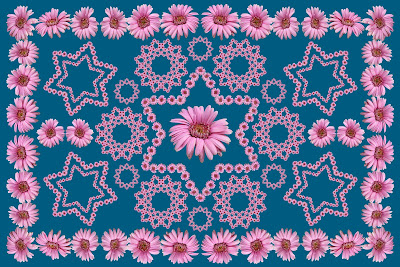 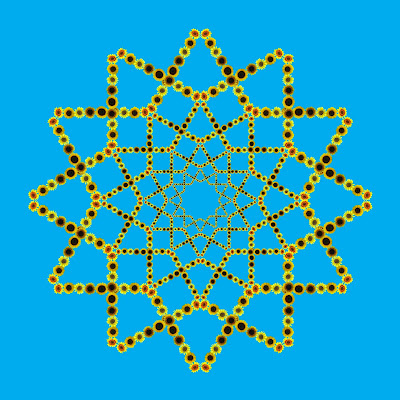 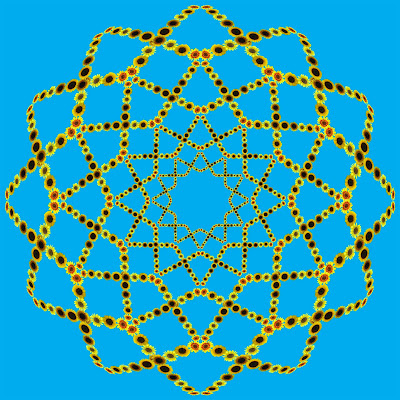 In creating this composite of pink daisies, I created some simple stars with lines of the blossoms. I made them more complex, by taking the 6 pointed star and duplicating and rotating it 30° to create the 12 pointed stars. By putting smaller stars inside of the larger ones, and repeating that process, I came up with even more intricate designs.
*******
I thought it worked very well here, but in experimneting with other flowers; found that it doesn't always work as well. Still, I think it will have usefulness; and perhaps some of you will figure out how to improve the method.
*******
I did use this approach with the sunflowers. I have made several attempts in the past to "spherize" some of my images and have not been satsified with the results. Under Photoshop filters there is a distort funciton. As a subcategory under that is the spherize option. I used it to turn the star complex into a shape wrapped around a virtual sphere. Again, some of you may find more use for this than I have so far managed.
Posted by Bob Coyne at 10:52 AM No comments: 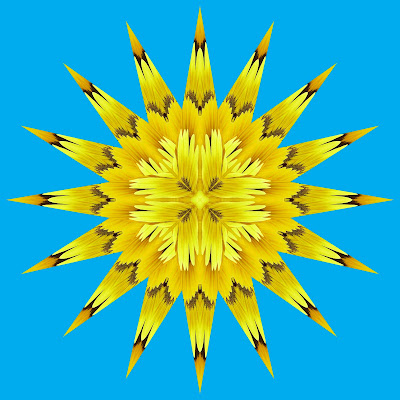 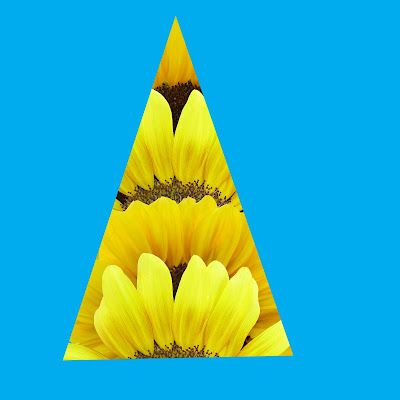 I include this one because I got the idea to stack several overlapping flowers to create the triangular cutout. That has the potential of adding a lot of complexity to these designs.
Posted by Bob Coyne at 10:48 AM No comments:

This is the second of two blogs I have created to demonstrate the process of creating digital mandalas. The impulse to share is a strong one for me. As soon as I learn how to do something, I want to share it with others. I have been having so much fun with digital art, that I would like to help others experience the satisfaction that comes from this creative medium.
*******
If you are new to blogs, scroll down to the original (oldest) post to start at step one.
*******
Information about my designs and links to my other blogs can be found on my "parent blog", Nightblooming Cards. It is found at:
http://nightbloomingcards.blogspot.com/

Bob Coyne
For 28 years, I ran a board and care home for chronically mentally ill in Tucson, and really enjoyed the work; but creating art has always been a part of my life. I have worked in various media including oils and acrylics, stained glass, cloth and wood; but I have been concentrating on digital art for the past few years. I have never made my living with art, but I do take it seriously. I don't want to give up my care giving work, but some supplemental income will be helpful. I specialize in designs using flowers of the Arizona desert and think my creations reflect my appreciation for cacti and nature in general. Many of my designs feature mandalas, and I pray that all portray beauty and harmony. In 2012, I moved back to Maine after 31 years in Arizona. I grew up in Maine, and am happy to be back. I will continue to add to my Cactus Hugger designs reflecting the beauty of Arizona, but will be adding designs that come from an appreciation of the beauty of Maine and New England. I am continuing work in care giving, and always like to do gardening wherever I am. I now live in the country and have chickens. I plan to add milking goats and more.